This award is from a business contest held jointly between the familiar economic magazine Fuji Sankei Business-i and the small-to-medium venture support organization “Innovations-i”, judging companies in Japan exhibiting innovative business developments not limited to robots and Pepper. From the hundreds of qualified applicants, our company was awarded as a top 9 finalist.

This year, our company has turned Pepper-based software and solutions into the makings of business, developing numerous first cases in Japan; particularly in creating the business of robot presentations and Pepper-use customer service software, chosen through evaluation.

Additionally on December 2nd, as a top 9 company, we took the opportunity to give a business presentation. In front of approximately 200 companies in attendance, we gave a presentation about our new products and new business’s business model’s profitability, growth potential, innovation, and contributions.

In our company’s presentation, at first not President Miyazawa but Pepper appeared and began presenting.  In response to Pepper actually giving a presentation, the surprised voices were heard of not only visitors to the event hall, but even those of other performers. However, at our company, because of our team’s original software for Pepper presentations and operational know-how, we have established a stable structure. 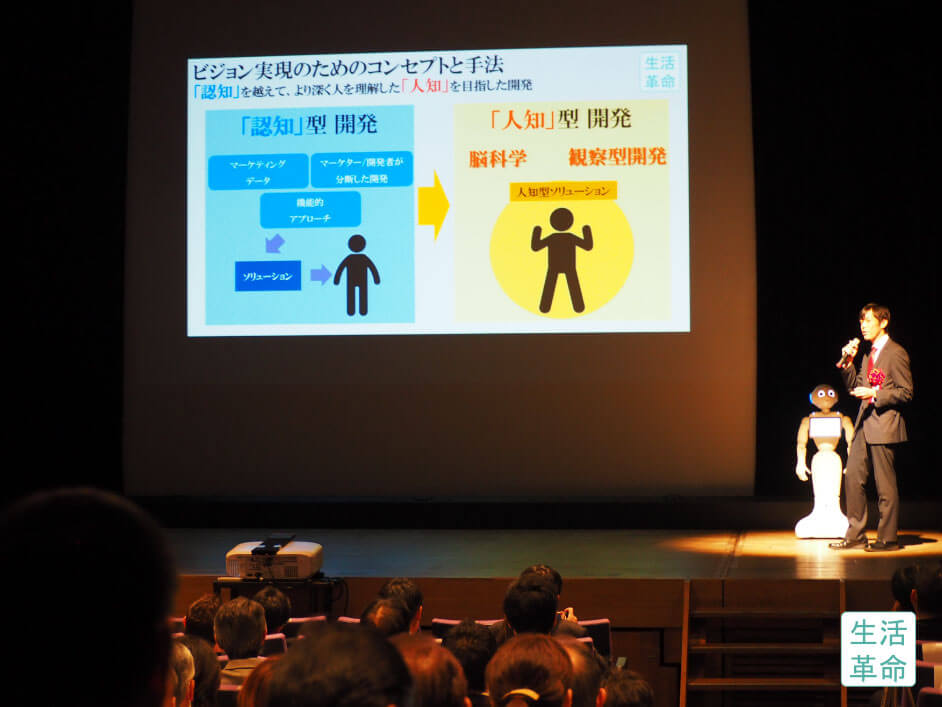 From the development of “recognition” to that of “human knowledge”, using brain science and observational development as the basis of our company’s competitiveness explained how, in regards to Seikatsu Kakumei and through our company’s concept and product illustrations, “In only 10 months since our company began, how have we been able to mass produce new products adapted to society in such a short time frame?”

As a basic part of introducing Japan’s first case of Pepper use, in Miyazawa’s place, Pepper explained itself. Pepper doesn’t get nervous, or forget lines, conveying the intended keywords to customers with certainty and enabling perfect presentations. (Maybe it’s just my selfish impression, but I get the feeling that when Pepper talks, the subject matter is taken in better than when a person talks.) 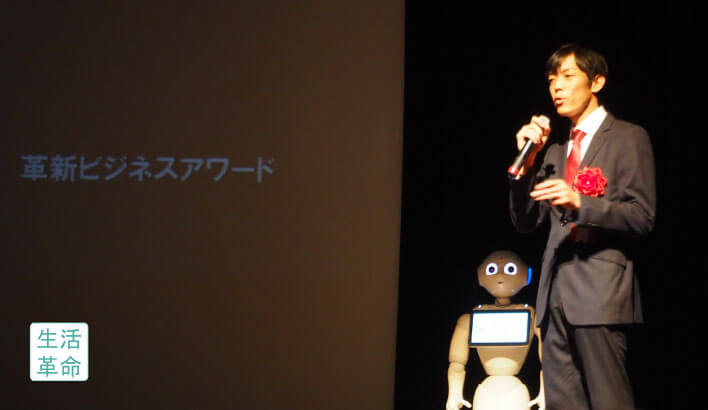 On a note that made us extremely happy, the amount of applause we received when the presentation was over was the very greatest out of the 9 companies. At the social gathering afterwards, when we asked the reasons why, we heard, “I didn’t know Pepper had such business uses!” “From a technological standpoint, this was truly realized!” “While Pepper’s voice is more firm than that of the ones in stores, it’s so cute!”. As part of our company’s identity, to understand that so many people had evaluated us with such comments, made our team feel very emotional.

President Miyazawa continually asserts, “Pepper and other contemporary robots are not just a fleeting novelty; the potential to make human lifestyles truly convenient cannot be realized unless those who are involved create the ways to convenience human lifestyles. Additionally, we cannot achieve that purpose without becoming an ongoing business,” and was truly grateful to be able to convey this to the various officials and audience members present.

In accepting this award, we extend our gratitude to the companies who took the chance to do business with us, as well as to everyone who has cheered on and supported us. Thank you very much. We are all very pleased to be able to make this kind of report at the end of 2015.

In the remaining month of December and continuing into 2016, Seikatsu Kakumei looks forward to helping assist partner companies and make human lifestyles even more convenient, through further refinements. We thank you for your continued support.

In other words, we are accepting orders not only for system development, but also rentals and event planning and operation of the conventionally strong robot Pepper!♪