Contest Favor Stickers Were Sent Out

When we opened the thick envelope, a large quantity of favor stickers was inside! 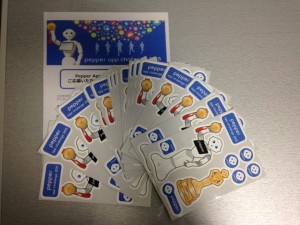 Though we thought perhaps there were so many as the result of a mistake, we had entered 20 productions and it seems that entrants received one sheet of stickers for every entry they submitted. (When we saw the state of other entries, it seems there was a large volume.)

If you see our company’s Pepper at an event or such, be sure to tell us.
We’ll give you some favor stickers! (Since there are only 20, they’ll run out fast.)